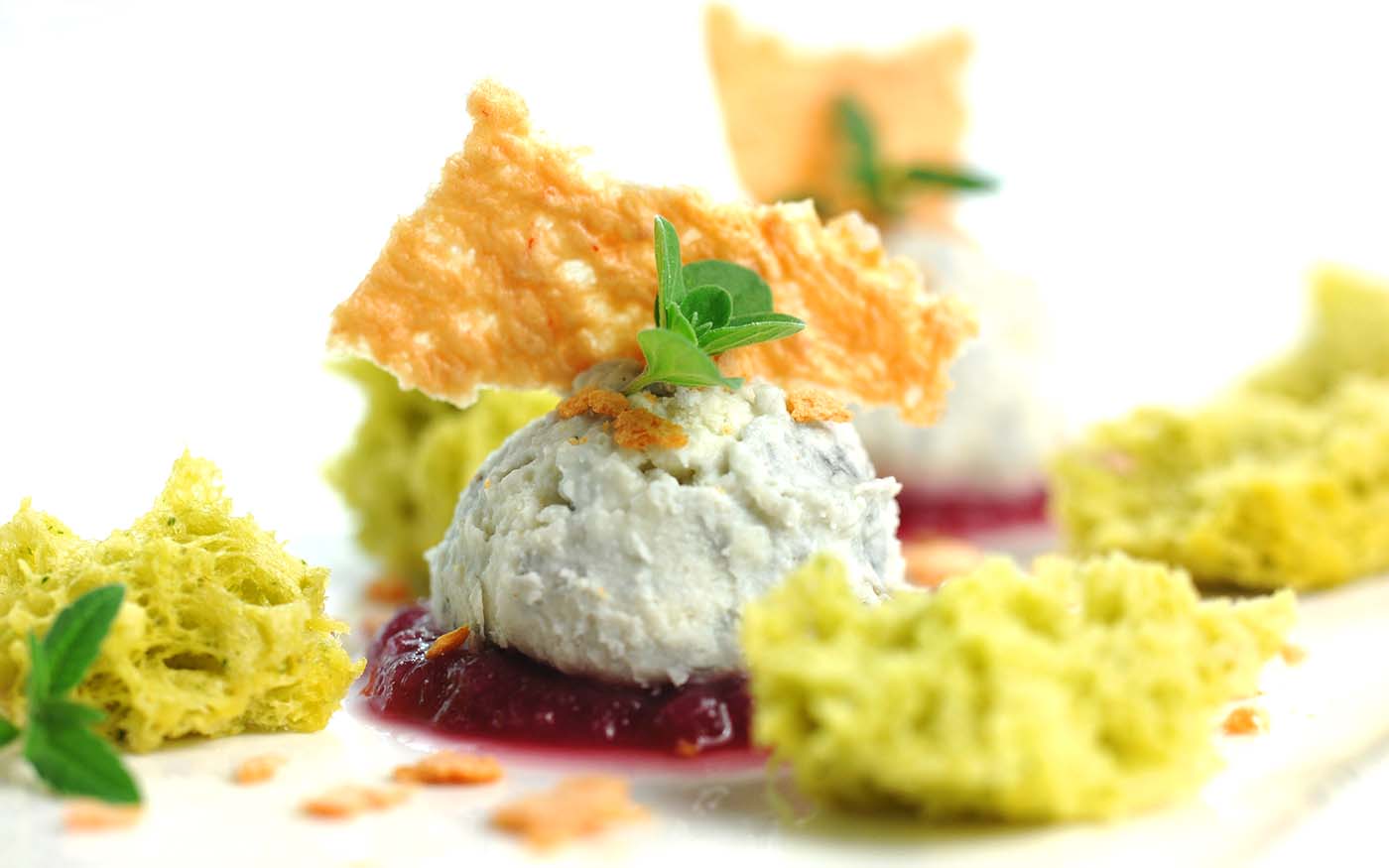 For the crispy pink shrimp:

For the pear and basil sponge cake:

Peel the ginger and cut into half a centimeter cubes. Put in a pot with a liter of water and let it cook for forty minutes. then drain the ginger, weigh it and put it back in the pot together with the same amount of sugar, covering it with a small amount of water and then add a piece of chili – it should just be barely spicy enough – and bring it to a boil, until the water is almost completely evaporated. Then transfer the ginger to a sheet of oven paper, let it dry for at least six hours and then mix it with the sugar. Put grated cheese in a saucepan with the cream and marjoram and bring to a simmer on very low heat until it all dissolves.

Let cool, then whisk the egg white until it is quite firm and then add it to the saucepan. Pour the mixture into a container and place it in the freezer for an hour. Peel and chop up the onion. Then, take a pan and cook the onion, vinegar and sugar in some water and bring to a boil. When the sugar has dissolved, add the onion, cover and cook for about an hour, then drain the onion. Weigh it and put it in a blender. Add a small amount of cooking liquid equivalent to half the onion’s weight, then blend until the mixture is smooth. then put it in the freezer, stirring occasionally. After it has frozen, take it out.

Add in the unrefined salt and ginger. Put back in the freezer until just before serving. Clean the shrimp and cook the heads to make a light broth, using a ladle to stir the shrimp. Put the baking paper on a baking tray and pour the mixture in it until you get a layer a few millimeters thick, and then bake at 180 °F (80 ° C) until it becomes a crispy wafer. To make the basil and pear sponge cake, beat the eggs and egg yolk together, then add the flour. Mix it all together with the basil leaves, the pear pulp, a pinch of salt and freshly ground coriander seeds. Sift the mixture and turn on the whipping siphon, add two charges of gas, shake and then whip up the mixture and put into two glasses up to about two-thirds full. Put the glasses in the microwave and cook on full power for one minute, then remove the spongecake from the glasses.

Serve a spoonful of cold onion on the dish and place a ball of ice cream on it. Place the crispy shrimp on top, and then garnish with the sponge cake pieces. Serve immediately.