You are here: Home1 - Recipes2 - First Course3 - Cannoli made with kataifi pasta with Pecorino Toscano PDO and mussels

Cannoli made with kataifi pasta with Pecorino Toscano PDO and mussels 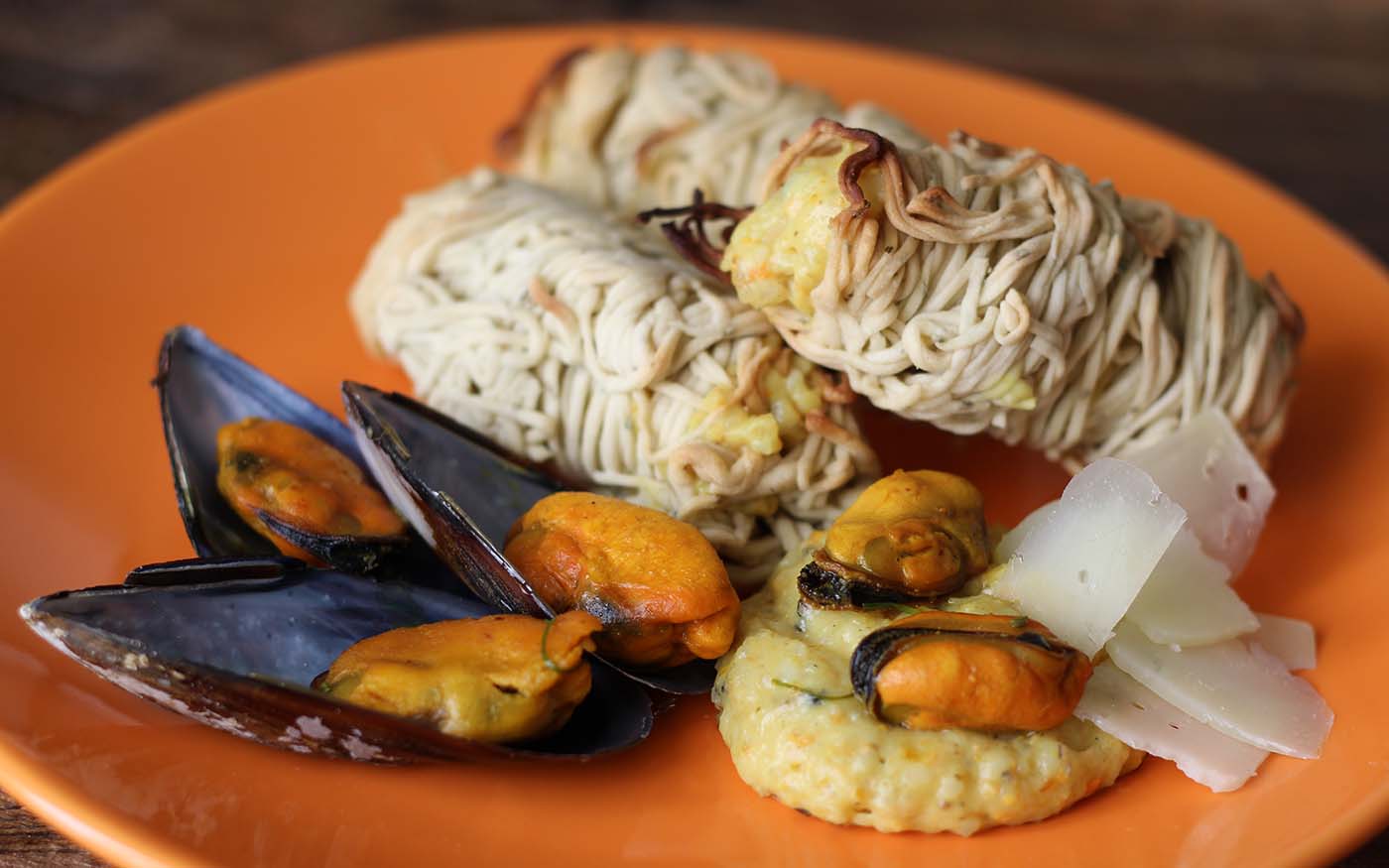 Foam for potato, cheese and mussels:

Cook the mussels with the spice mixture and sesame oil. If you’d like, you can add a clove of browned garlic. For the dough: Put the flour in a bowl, making the classic shape of a fountain with a hole in the center, adding salt and, gradually, the water at room temperature. Knead energetically until you get a smooth and firm ball. Cover with plastic wrap and let it sit for at least 45 minutes.

Meanwhile, wash and scrub the potatoes and then boil them in salted water. Once the dough has sat for the time allotted, begin to roll it out a little at a time. You can use a rolling pin or a pasta machine. After getting thin sheets, glaze three layers at a time with extra virgin olive oil. If you use the pasta machine, and you puff long enough, you can fold it three times, but if you make smaller sheets, make three layers, one above the other. Put it through the pasta machine or roll it out with a rolling pin and then slice them into thin noodles, similar to angel hair pasta.

Oil the knife very well for the cannoli and wrap a bunch of noodles so that they are quite compact, but without crushing them. Lightly oil the pasta and put it in oven at 180 degrees until the outer layer begins to brown. Once cooked, take them out of the oven and let them cool. Preparing the filling: skin the potatoes and cut the pecorino into cubes. In a mixer, chop up the pecorino first and then add the potatoes and at least 1 cup (100g) of mussels. Little by little, add the broth or water and a bit of oil until you get the consistency of mousse. Add salt if you need to.

Now the only thing left to do is fill the pastry bag with the mousse to fill the cannoli. Put 2 to 3 cannoli per person on plates, more or less depending on how big your cannoli are, a spoonful of mousse garnished with Pecorino Toscano PDO petals, and top it all off with a couple of mussels left in their shells to give the plates a nice finishing touch.